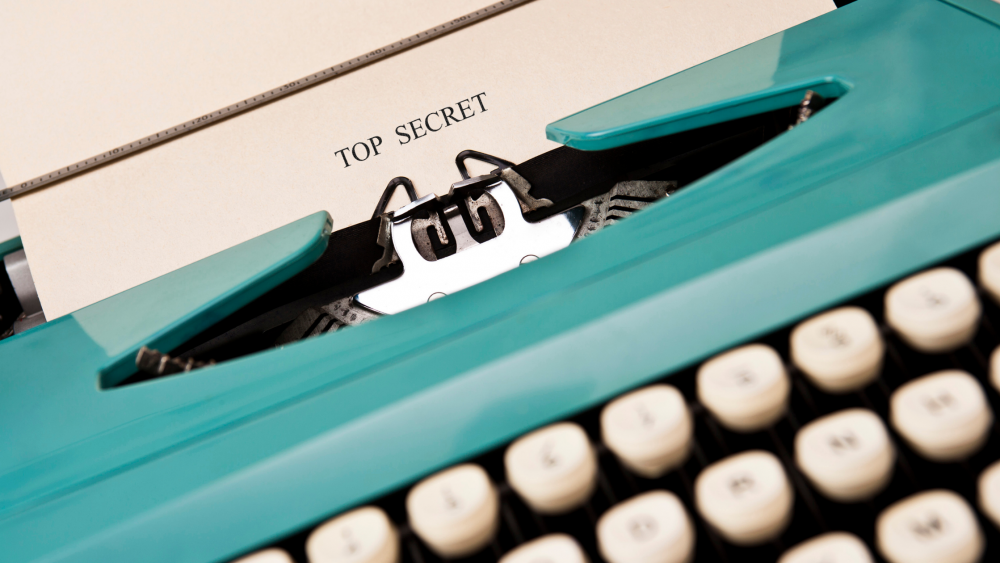 When done well, it’s like the Pied Piper’s pipe of sales copy.

In this bestselling book Great Leads, Copywriting legend Michael Masterson actually called it “the dominant lead type in the information publishing industry” and holds it responsible for billions of dollars in sales.

In fact, it’s so powerful that a German monarch used it to sway an entire population!

(More on that later.)

However, the astonishing thing is, it’s not complex psychology or some Derren Brown-level hypnotism that takes decades of learning and a PhD to master…

…although it almost has the same effect!

Anyone can learn how to use it in only a couple of days.

In fact, you probably use it every day without even realising…

… and it’s happening to you right now.

The power of the secret

It doesn’t matter how it’s told, when we hear about a new “trick”, “hack” or even a juicy piece of gossip in our area of interest, our ears perk up like those of a bloodhound that’s hot on the trail of its next prize.

Copywriters know this and use secrets to create bloodhound-like levels of excitement around whatever they are selling.

This article will delve deep into the art of using secrets in copywriting. I’m going to break down why secrets hold such a powerful grasp over us and how you can put secrets to great (ethical) use in your own business in order to drive awareness, generate leads and boost sales.

Learn this trick well and you might not need to spend thousands on a copywriter next time 😉.

(But if you do, at least you’ll know how to spot a good one!)

Businesses are fighting for attention

Marketing is all about getting attention. It always has been, and it always will be.

The problem is our brains are very picky about what we actually pay attention to.

Like a cranial Simon Cowell searching for talent, the brain ruthlessly filters through the vast amount of data we are bombarded with each day.

To give you an idea of what our brains are up against, they can only consciously process 0.00045% of all the data our body sends us! Which is a meagre 50 out of 11 million bits of information per second.

So, it’s easy to see why so many marketing messages are getting lost in the noise.

To even get a few seconds of attention, businesses need to find ways to be part of that minuscule 0.00045%. And one of the most powerful ways to grab this tiny slice of attention is by creating one of marketing’s most sought after responses: curiosity.

Here’s the thing: curiosity might have killed the cat, but it made the copywriter rich.

Because when you have captured someone’s curiosity, you have their attention, and that leads to sales.

In 1774, Frederick the Great of Prussia wanted to get his people growing and eating the new superfood of the time – the humble potato.

However, Frederick had a problem…

People back then were suspicious of this foreign food from the New World, refusing to neither eat nor grow potatoes. The townsfolk of Kolberg actually wrote back to the king saying they weren’t even fit for their dogs!

So, Frederick decided to rebrand the unloved tubers and season them with a little secrecy…

He planted a “royal” field of potatoes and stationed guards to watch over the growing veg, ordering no one to be permitted to enter.

And then, something incredible happened…

The people decided that anything worth guarding was worth having themselves, so they started to steal potato plants from the royal field to plant in their own gardens!

This was obviously Frederick’s desired effect and his marketing campaign worked a treat. Thus, the potato became the new staple of the country.

I love this story. It shows us how something as undesirable as a potato can be transformed into a royal prize, all by leveraging the power of the secret.

But make no mistake. These same tactics work just as well on the modern man/woman as on the 18th-century Prussian peasant. We only need to take a quick look at the science behind it to understand why.

We are hardwired to seek out the novel

Recent studies have proven that our brain releases dopamine when we encounter something novel. It’s like a built-in reward system for discovering new stuff. The more we seek out the new, the exciting, or the secret to something, the better we feel and the more we are inclined to repeat the process in future.

Like our man Frederick with his potatoes, copywriters can use a well-placed secret to add a huge amount of novelty to a product or service. This fires off our ancient “reward chemical”, dopamine, and makes us eager to find out more.

In most modern marketing, the promise of finding out more comes in the form of a tempting “Click here”, “Download now”, “Subscribe today” or even a straight-up “Buy me” prompt.

And it works a charm.

Where to start with a secret?

One of the first places a copywriter will start with the secret is, naturally, the first place anyone will look – the headline. This is what’s going to give you those crucial first few seconds you need to get your prospect interested enough in your product/service to read the rest of your copy.

Let’s start by looking at some very famous, and very successful, headlines that employed a secret. The list of examples below is taken from the great Victor Schwab ad 100 Good Advertising Headlines – And Why They Were So Profitable.

“How To Win Friends And Influence People”

“Why Some Foods Explode In Your Stomach”

“When Doctors Feel ‘Rotten’ This Is What They Do”

“How I Improved My Memory In One Evening”

“Discover The Fortune That Lies Hidden In Your Salary”

“How I Made A Fortune With A ‘Fool Idea’”

“Profits That Lie Hidden On Your Farm”

“What Everybody Ought To Know…About This Stock And Bond Business”

Notice how each of these headlines touches on some valuable piece of hidden information that helps the reader achieve something. There’s no description of what it is, no hint at what it could be, only that there is something out there that can help them and, if they read on, they may get to find out what it is.

These headlines are all brilliant examples that have been re-hashed by marketers for decades now. They are the sort of headlines that get you to click on ads without even realising why you did so in the first place.

Before you know it, you are on a dopamine-fuelled hunt for answers with one hand already on your wallet – just from a single sentence!

Unfortunately, secret headlines have also led to some pretty awful clickbait with outrageous headlines like:

“Learn How To Lose 1000lbs In Two Days With This One Simple Trick!”

The purpose of your copy should be to get your prospect’s attention in order to convince them that your solution can actually solve their problems. When you make wild claims that can’t be backed up, you will only make them suspicious, or frustrated once they find out it was all hot air.

Instead, try to keep your headlines realistic, and back them up with case studies/research to build trust and keep your prospect curious.

To inspire you to come up with some secret headlines of your own, try using the ones from the Schwab examples above (and in the pdf link) and adapting them to your industry.

However, keep your solution hush-hush for the big reveal. If you give your secret away in the headline…well it’s not really a secret any more, is it?

Keep it secret, keep it safe

As we have already discovered, one of the main attractions to a secret lies in the chase itself. The hunt for answers keeps the dopamine burning in your prospect’s brain, so you need to make sure that you keep the secret locked away long enough to create a burning desire to buy from you.

Take some advice from wise old Gandalf and: “Keep it secret, keep it safe.”

Then, you can make your irresistible offer.

Think of it like a trail of breadcrumbs for your prospect to follow. The more clues you leave along the way, the more the excitement builds, and the more appealing your product/solution becomes to the prospect.

Copywriters use a whole host of techniques to create this level of excitement in their emails, landing pages and sales letters – let’s look at a few of them now.

Thousands of copywriters use this simple strategy to generate hundreds of thousands of dollars every month!

Ok, that wasn’t a great example, but you get the point. People generally look to other people for validation on the decisions they make. The general feeling is:

For example, most of us will make buying decisions based on the customer reviews section of websites, right? When was the last time you bought anything on Amazon with only a one-star rating?

Social proof provides evidence of your solution working and helps to satisfy the logical part of your prospect’s brain that asks the question: “Will this work for me?”

Using social proof in combination with a secret can be a very powerful way to keep your prospect on the breadcrumb trail, but always remember to tell the truth! Make sure you can back up your claims with a few real testimonials in your copy to avoid looking too clickbaity.

Authority – the seal of approval

Take a look at this email I was sent from copywriting giants Agora last week:

Now, I’m not an investor, but even I had to find out what this guy was on about!

This is a fantastic example of how a copywriter can use authority to add intrigue to a secret. People are always looking for ways to gain an edge in life or in business. Often, we think that edge comes from knowing something that everybody else doesn’t know.

So when there is a “secret formula” to success that’s validated by an authority figure, our curiosity levels can go through the roof.

Finding the right authority figure in your copy can take a lot of research on your part. You need to find some ingredient or feature of your offer that you can position next to an authority figure, but if you do it well, the results can be tremendous.

Keep in mind that an authority figure doesn’t have to be a famous celebrity though. It could be a big brand in your industry or even a scientific study that you found online. As long as it holds weight in your community, and can be directly linked to your product/service, feel free to get creative with it!

Keep the people guessing and they will reward you for it

Like I mentioned before, your secret should stay safe for as long as possible, so if you are writing a short Facebook ad, don’t reveal it there!

Keep the prospect engaged but still guessing until the close, if you can. If you reveal your secret too early, the game is up and, even though your offer is the same, it won’t be valued half as much (if they even see it at all!).

In the words of Thomas Paine: “That which we obtain too easily, we esteem too lightly.”

So, keep your prospect on their toes and they will reward you for it!

It takes a bit of practice but use the techniques in this blog to help you. Soon you’ll be well on your way to mastering the art of the secret and keeping your prospect hooked until you are ready to sell…and they are excited to buy!

For more copywriting tips and tricks that will help your content reach more people, get in touch with me or Georgia Kirke on: info@writebusinessresults.com.