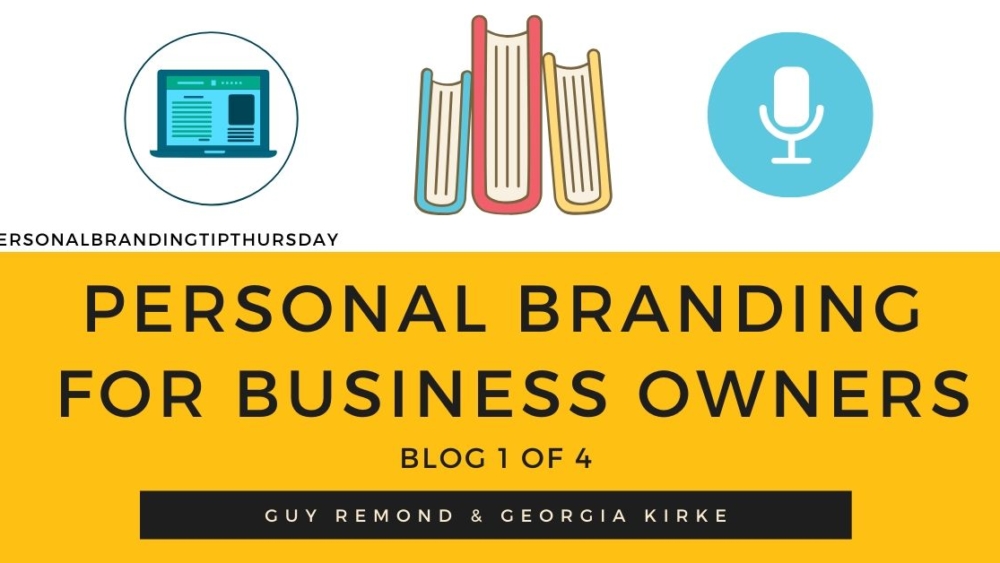 Guy, thank you for doing this series with me on building personal brands for business owners! You have had huge successes in your businesses as a result of brand building and have loads of good stuff to share with us over 4 blogs! These will be published on the Write Business Results site for #personalbrandingtipThursdays over 4 consecutive weeks.

Let’s get going. With 20 years in business, there must have been a specific point in your career when you had to start thinking more about building your personal brand. Can you pinpoint that time?

Hi Georgia, thanks. Yes, I built and ran a company for 17 years before it was acquired in 2017 – it was a software development company. If I am honest, like a lot of good ideas, we stumbled across the idea of personal brand building, but then we realised that there could be an awful lot more to it if we did it right. I guess sometimes the skill in business is in actually realising when you’ve got something, and then moving it forward.

So what happened was, one of Cake’s co-founders, a guy named Jan Machacek, was really good at attracting great people to work with us. To do this, he was putting a lot of content out there about his technical expertise. We quickly realised that Jan was getting quite a following, and it was leading to engineers applying for jobs with us. It’s these types of activities that get you more involved and active in your industry’s community.

We also wrote a series of books on the technologies that we specialised in and there were a number of different authors within my team that contributed to these books. They were successful and what they did was, when you walked through a door of a client and you put that book in front of them, or even better, they heard of you first when they read the book, and then contacted you, then the conversation wasn’t about our expertise; that part of the discussion had already been taken care of as we’d demonstrated our expertise through our content already. So at that point, their first point of contact with our organisation, they’d already fully bought into what we were able to do.

So, books are great for building personal brands, and the user groups and the community tech stuff we did was great. And then, blogs became more of a thing, so early on in the development of blogs, Jan started to write blogs and again, he built his following even further. So now he was writing blogs he was speaking at user groups, speaking internally, as we were building a company and then growing the number of engineers we had from there.

He was doing some national speaking, and he also started to present at conferences. And before you knew it, he was building a really strong personal brand. The company was also recognised, because he worked for the company.

And despite what people worry about – and I think this will be a question you asked me so I’m going to try and preempt it – people worry that if they let their employees build personal brands that they will get poached. Now, they could get poached at any point, and definitely if you raise your head above the parapet and make noise in the community and to the outside world then I guess you’re more of a target for recruiters and competitors. But if you have the right basis for people wanting to stay at your company, that should be nothing to worry about.

So in conjunction with building your personal brand, you should also make sure that your culture is set up correctly. Now that’s a whole different blog, book and series of podcasts in itself, but it’s certainly nothing to worry about if you have the right culture in your company. You should absolutely encourage your teams to build personal brands, because quite frankly it enabled us to build a company without the need of a sales team. We had such a voice in the community. And it was from the experts, it was based around blogs, predominantly, and talks, both in the UK and around the world, user groups, and doing talks internally.

We proactively encouraged our people to build their own personal brands. Although we happened upon this with Jan doing his thing we then realised that it was doing amazing things for sales in the company. So we then encouraged the rest of the team to do it, too. And actually, it became part of our interview process so we made people aware of this and they were probably already aware of it because the other strategic byproduct, from working in this way, is that potential employees get to hear about you.

As you know we specialised in a relatively niche technology when we first worked in this area. As it began to grow, and our people began to talk about it in the blogs in the user groups in their conferences, then our notoriety in this area of expertise grew and we became the go-to company in this area.

The second strategic byproduct was that partners became interested in working with us. And when I say partners – the people whose technology we’re talking about, the type we were experts in – were not only doing great things for themselves but they were really helping us so we built a partnership with those companies, and that had a massive impact on our sales pipeline and as a result, the domain experts; the people who actually built the technologies.

They were approached by companies looking for companies to build their software with these technologies, and they referred them to us. So that was another great strategic byproduct of this strategy of allowing the team to build their personal brands, and not worrying about them going because our staff retention was incredible. It was because we had the right cultural platform behind our operations.

If you want to reach me to chat about any of the things raised in this series of blogs or thestartupfactory.tech, my personal email address is guyremond@gmail.com.