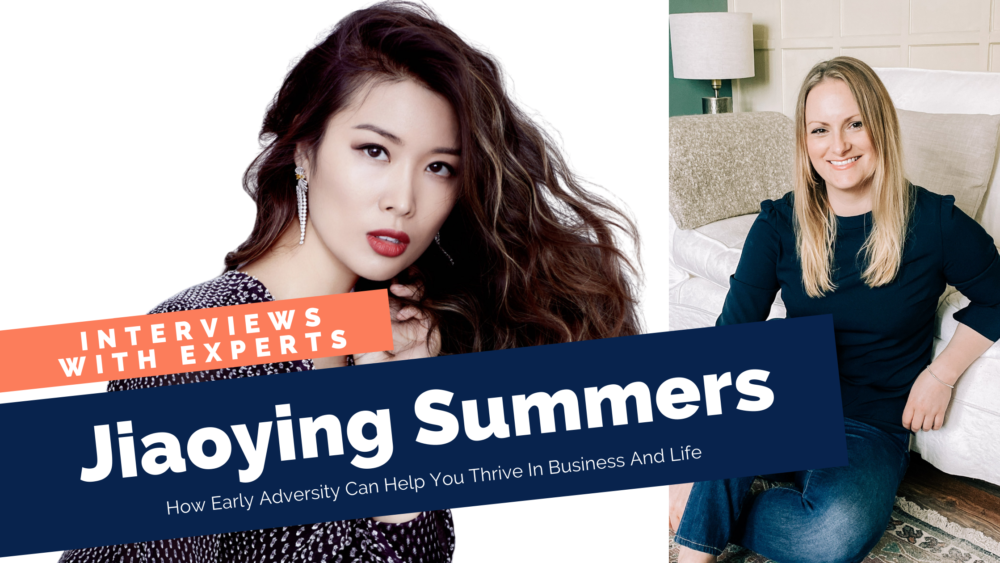 When you look back on a painful time in your life can you identify any ways that it might have helped you build the business you’re in today?

The most challenging experiences are often the ones that fuel our motivation to succeed against all the odds.

Actress, comedian, producer and philanthropist Jiaoying Summers has used her childhood adversity to create her own thriving personal brand and business.

She’s the founding partner and CEO of Summers Media (producing content, movies and TV shows), and she owns The Hollywood Comedy Club and The Pasadena Comedy Club in Los Angeles.

Jiaoying, who is also a mum of two, is hilarious, and although her sense of humour initially developed as a coping mechanism it is now a hallmark of her success.

Jiaoying was born in China in the 1980s when there was a strong cultural preference for couples to give birth to a son; for that reason society considered her a disappointment from the moment she entered this world. Many young girls were adopted because their parents wanted a boy.

Growing up Jiaoying was told she had to be a high achiever at school, stay slim, and prove herself or she would be put in the dumpster! As she matured she realised she had to find a way to stand out for positive reasons. She decided to help people laugh by making them happy!

Perception is all there is

Aged 17, Jiaoying chose to study at Kentucky University where she discovered a new self image.

Jiaoying: “Having dark skin is considered unattractive in China but in America people loved my skin colour and my big lips. I came from a small town but university showed me there was a whole new culture to explore and I began to realise that other people didn’t get to decide what kind of life I would have!”

Jiaoying went on to create a number of different characters as she developed her comedy sketches. She has a natural talent for recognising cultural nuances that will have people clutching their sides. For example one of her characters, ‘Uber Karen’, is described by Jiaoying as annoying, mean, racist and stupid.

I wanted to find out why this type of character was so significant to her.

Jiaoying: “You can find men and women similar to Karen everywhere. People might assume they are white, so I made Karen Chinese to bring life to the issue; being a minority group doesn’t mean you have to be a victim, and they can be just as hateful! My mum is Chinese; she tells me to stop eating because I’ll get fat. She thinks if you are bigger than a chopstick you are fat! My mum is my hero because she didn’t put me in the dumpster!

I just want to show people that these opinions exist, but in a way that makes them laugh not worry. Lots of people have low self esteem because of their upbringing. My humour is really dark but I believe we should be courageous about our issues and our problems. We need to talk about them and that’s better for everyone. If we feel depressed or hold onto a childhood trauma it is always there to hurt you! Therapy is a great support.”

It’s evident that Jiaoying has decided to reframe her painful experiences and put them to good use! She’s packaged them into something that the rest of the world can appreciate and learn from.

Her courage to stand up for herself and follow her own dream leads the way for others. She went on to share how her frequent rejection as a child supported her to persevere as an adult.

Jiaoying: “As a Chinese woman I found it hard to get on stage because comedy club owners don’t think women are funny. I knew they were wrong so I set up my own comedy clubs!

The entertainment industry is hard, not only am I a comedian but I have to be a businesswoman. I have to be shameless to sell tickets because we cannot put an amazing comedian on stage if nobody buys the tickets. I want to help people perform at their best and showcase them when they’re good enough. I know they are funny, but some of them need more practice. Now I understand why it was hard for me to get on stage to begin with!

I used to think that club owners were being mean, but many of them were simply protecting their reputation. I’m determined to help more female comedians bring their humour to the world.”

How to turn early adversity to your advantage

Jiaoying’s resilience is admirable; many of the most successful entrepreneurs I know share this level of tenacity and perseverance irrespective of the obstacles they encounter.

Perhaps you’ve experienced childhood adversity or have a powerful story to weave into your personal brand to help you grow your business? If you’d love our expert support to help you do that through books, blogs or podcasts please get in touch.

You can hear my full conversation with Jiayoing Summers on our podcast, Interviews with Experts.