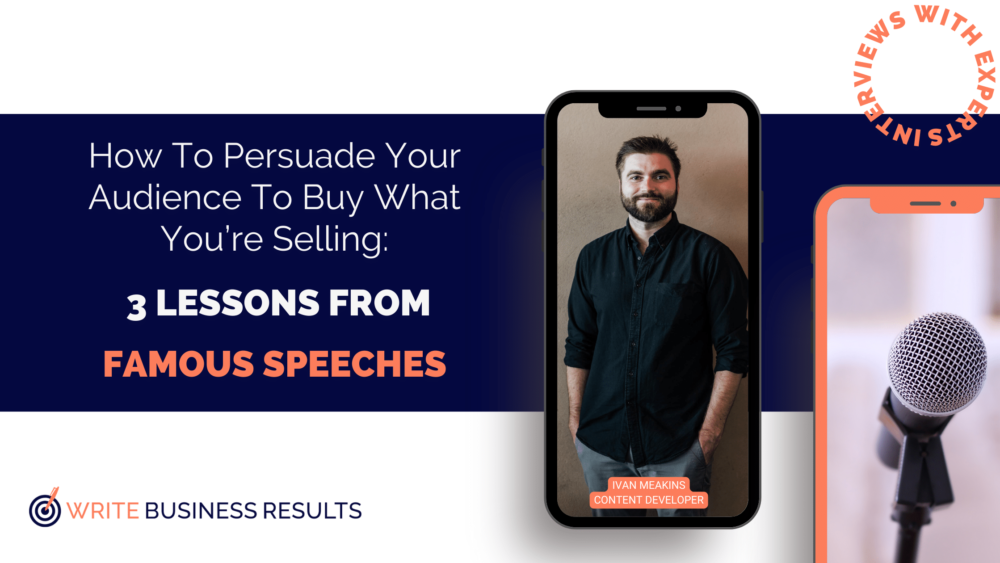 The goal of every content creation process is simple: to persuade your audience – whether it’s through sales, a well-crafted argument, or even a book. Contrary to popular opinion, nailing this feat is in no way like taking candy from a baby. In fact, it’s the complete opposite – like stealing a treasure from a fire-breathing dragon.

So what can you do to warm the hearts of your audience and convince them to listen to you? The answer – it seems – lies in a short waltz through history, down to some of the most famous speeches humankind has known, and analysing these speeches to uncover their persuasive charm. How did these speakers evoke a powerful response and get the audience on their side?

Let’s dive in, shall we?

Using pathos to turn the tide

These three famous speeches all have something in common: pathos. When it comes to historical speeches, we often wonder how the speakers nailed it. With no artsy Powerpoint slides or ads to complement them, one might wonder how these speeches still managed to earn a place in the sands of time.

As both a history and content nerd, I had to delve deeper, back to a time before even Alexander was galavanting around the ancient world winning battles for fun. According to Aristotle, every speaker must have three things under control: their argument (logos), presentation and credibility (ethos), and finally, the audience’s emotional involvement (pathos).

Fun fact: Aristotle was said to have mentored young Alexander, so you know he’s learnt from the best!

While the first two are essential, pathos is the icing on the cake. It’s the extra dash of seasoning in every recipe – often overlooked but highly essential (as one culinary disaster has taught me). Since humans are emotional creatures, it makes sense that the emotional form of persuasion is raw, powerful, and guaranteed to drive results.

King, JFK, and Alexander all used pathos in three different ways. Here’s what we can learn from their speeches:

Appeal directly to your audience’s morals and virtues

At WBR, we understand that content creation isn’t solely about telling the story that’s inside you but aligning it with your audience’s needs and values. But how do you pull this off?

Borrowing a page from our three famous muses, I would say that the key is in finding out what your audience’s lifelong values are. What’s the one thing that they stand firm on? The one hill they’re ready to die on?

For Alexander the Great, it was his men’s spirits – their need to conquer and push past obstacles. He tapped into this need by ascribing them a god-like status and comparing them to the ancient Greek deities of old:

“Even Dionysus, who is a god indeed, in a sense beyond what is applicable to Heracles, faced not a few laborious tasks; yet we have done more: we have passed beyond Nysa and we have taken the rock of Aornos which Heracles himself could not take.”

Martin Luther King does a similar thing in his speech. By calling upon his audience’s patriotism and sense of what it is to be American, he explains that the current status quo is in direct violation of the constitution:

“This note was a promise that all men, yes, black men as well as white men, would be guaranteed the ‘unalienable Rights of Life, Liberty and the pursuit of Happiness.’ It is obvious today that America has defaulted on this promissory note, insofar as her citizens of color are concerned. Instead of honoring this sacred obligation, America has given the Negro people a bad check, a check which has come back marked ‘insufficient funds’.”

One thing I’ve learned from working with our clients at WBR is that every business leader wants to change the game and make an impact. To do this, we need to figure out what makes your ideal clients tick and paint a vivid picture of how your idea or brand aligns with their story/values.

Once you’ve identified what your audience deeply cares about, it becomes easier to draw them in and offer them two futures, one with your message, and one without it. A classic example of this in persuasive writing contrasts a grim reality with the perfect solution (which they just happen to wield). Or as I like to call it – utopia vs. dystopia.

Your audience has a problem that you can solve. You’re an industry expert with the right solution or tool to fill and seal that vacuum forever. In an utopian world, your audience walks with you through this problem, accepts your solution, and lives a hitch-free life. On the other hand, the dystopian reality poses a scenario where they overlook your high-value solution and miss out on its benefits.

When creating marketing content, you may want to highlight and flesh out these opposing arguments – an ideal world and the worst-case scenario. While you don’t want to bog people down with fear mongering and tales of doom, your content should be a wake-up call as to why your audience needs you.

Rather than delve into scare tactics, an efficient path to striking this balance is to provide three definitive options.

By providing your audience with these options, you’ve placed the choice in their hands while setting your brand apart as the ideal solution.

We see this play out in JFK’s speech where he juxtaposes the utopia of an American-led venture into space vs. the threat of a Soviet victory in this domain:

“For space science, like nuclear science and all technology, has no conscience of its own. Whether it will become a force for good or ill depends on man, and only if the United States occupies a position of pre-eminence can we help decide whether this new ocean will be a sea of peace or a new terrifying theatre of war.”

In this speech, JFK paints a vivid picture of the grim reality Americans face if the U.S. loses the space race. He harnesses the emotions evoked by this picture and suggests that there’s only one way to achieve true peace. The result? He galvanised public support, rallying people to believe and share in his vision.

Most clients want to know that you’re on the same team – that you share a common purpose with them. To evoke this bond and instil a sense of unity, your content needs to highlight a common enemy to band against (i.e. their problem or the real reason they have that problem).

You may want to spend some time detailing your journey with this “enemy” and why you’re committed to helping others eradicate it.

In JFK’s speech, he sets up the American people and their pioneering sense of adventure vs. the threat of a Soviet-led future by describing American owned space as an “ocean of peace” while the latter is a “new terrifying theatre of war”.

King does the same, pitting racial injustice as a dark and desolate valley, an enemy of democracy:

As we’ve learned from these two speeches and the events following them, humans will always gravitate towards a tribe or community of other like-minded people. Highlighting a common enemy in your book – or any other content – builds upon this principle and helps to instil trust and loyalty in your audience. More than that, it infuses your message with a sense of urgency and allows your audience to picture a glorious new destiny for themselves by following you.

When you create and nurture this  “us vs. them” mindset, you’re offering your ideal clients the opportunity to pick a side – the right side – and fight the problem together.

If you can pull this off and nurture a sense of unity through persuasive content, you’ll be able to convert your audience to clients and, subsequently, raving fans.

If you’re struggling to create persuasive content that will hit the right spot with your ideal clients, our team at Write Business Results can help you. Reach out to us at info@writebusinessresults.com or book a clarity call using the link below: BOOK MY CLARITY CALL NOW.