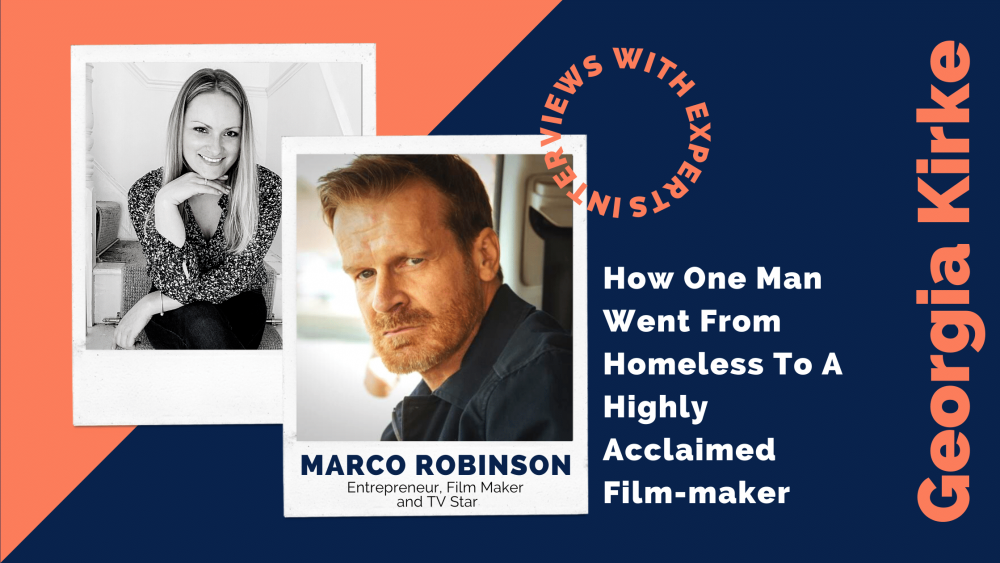 Entrepreneurs are passionate about building a strong and resilient mindset and if there is one person who stands the test of time in overcoming adversity it has to be film and TV star Sir Marco Robinson.

He’s recently enjoyed tremendous success with Legacy of Lies which made it into the top four of Netflix UK’s most-watched films.

When I realised it was in the top four I was so excited, because I knew Marco, and I knew that it was a pivotal moment for him.

His success has come after a long, long list of adversity. As a child, his mum had been sexually abused by her stepfather, and once grown up she married into another abusive relationship. For a period of time she and Marco were homeless. Despite all of this he found a way to dig deep and find inner strength most of us can only dream of.

Marco: “From the age of six I was the boy in the back of the class looking out the window all day. I was daydreaming of being in a better place because I hated where I was. I got really good at going into my mind. I dreamed about being James Bond, being a spy, making films and travelling around the world.

At one point mum and I were spending our nights sleeping on a park bench. I’d been to about 50 different schools by the time I was 15. I was bullied because I had bright ginger hair, my skin was so white, and I was small. I used to put shoe polish on my hair.

Around that time mum married a great guy whom she is still with today, but I decided I wasn’t going to live with them. I left school, got four jobs and slept in gardens, or in people’s cars, for four years.”

From what Marco had already shared it was becoming increasingly hard to believe there was going to be a positive outcome from any of this, but in true Marco style he found self-belief in an unlikely source.

Marco: “I worked in timeshare sales in the late ‘80s. I was the worst salesperson. I sold nothing for the first six weeks. I lived five miles from the office and every day as I walked to work I’d ask myself why I was such a loser. When you ask questions like that the answers are never good.

My boss said that if I didn’t sell a property within two days I would be fired; this triggered something inside me. I decided I would not go back to where I had been before. I changed the narrative in my head and started to ask what I needed to do to be successful.

Within a day the top salesperson offered to help me. He told me I wasn’t a loser and that I was just having a hard time. He said he used to have no sales until someone helped him. I was mesmerised. This had never happened to me; I had never been offered help like this.”

Marco’s sales director told him to repeatedly read Bring Out The Magic In Your Mind. He sold his first property the next day, which he attributes to the sense of self belief and passion he developed from reading the book eight times the evening before!

Every story I heard from Marco was more and more gripping. He has even been knighted for his amazing work transforming the lives of thousands of blind people in Malaysia (more on that in our Interviews With Experts podcast).

I was desperate to find out how Marco had become this highly acclaimed film-maker. I knew there would be a story to go with it. He did not disappoint.

Marco: “I got to the age of 45 and although I’d always had this dream of making films I had been a victim of my own success. I committed to making a film. I reached out to all the people I knew and wrote a script with one woman. I sent her £25,000. I never saw her again and that was that! I was so disheartened.”

Marco’s story was like a film within itself, which ironically is more or less what happened by the time he came to produce his Netflix success Legacy of Lies.

Marco was introduced to a man named Adrian Ball and together they decided to create a film called Truth 99. The plot, based on a true story, involved Russian people bombing a building in Kiev and killing 300 people. Marco began creating the publicity for the film. What he told me next blew my mind.

Marco: “I was living in Malaysia and we were announcing Truth 99 on all the social platforms when I got a call telling me I was all over the Russian news on TV (broadcast to 100 million people). They were showing parts of my social media (highlighted by red circles), where I’d mentioned Putin and the building being bombed.

The Russian news presenter was saying this man [Marco] is crazy. He’s going to get himself killed. I was the most scared I’ve ever been in my life. Adrian and I both agreed we could not risk going ahead with that film, so that was strike two. No film!”

As if that was not enough of a plot twist, what Marco shared next was bordering on unbelievable! I was waiting for the punchline.

Marco: “I had been talking to this Russian woman online for nearly a year. She came to see me in Malaysia. On the third day she told me I definitely shouldn’t make Truth 99. I asked what it had to do with her and she told me that she had not been honest with me, that she was Russian FSB [Federal Security Service]. My office, my house, my phone, my mobile phone had been bugged for the past six months!”

There is so much more to this story and the way that Marco shared it during our conversation was a feast on its own, so please do tune into the Interviews with Experts podcast and hear it directly from this man!

Legacy of Lies was inspired by Marco’s experience of trying to create Truth 99. He derived a lot of material from his brush with the Russian security agency.

One of the most inspiring parts of my conversation with Marco was his ability to share the story of his life in such a captivating way. I was permanently on the edge of my seat.

Marco’s forthcoming adventures, of which I know there will be many, can be witnessed on Instagram. He has a new film, A Beautiful Break-Up, due out this month [September 7, 2021], a romantic thriller and horror about true love.

At Write Business Results we’re passionate about supporting entrepreneurs to build a strong and inspiring personal brand. If you’d love to know how we can help you revolutionise your business email me at info@writebusinessresults.com