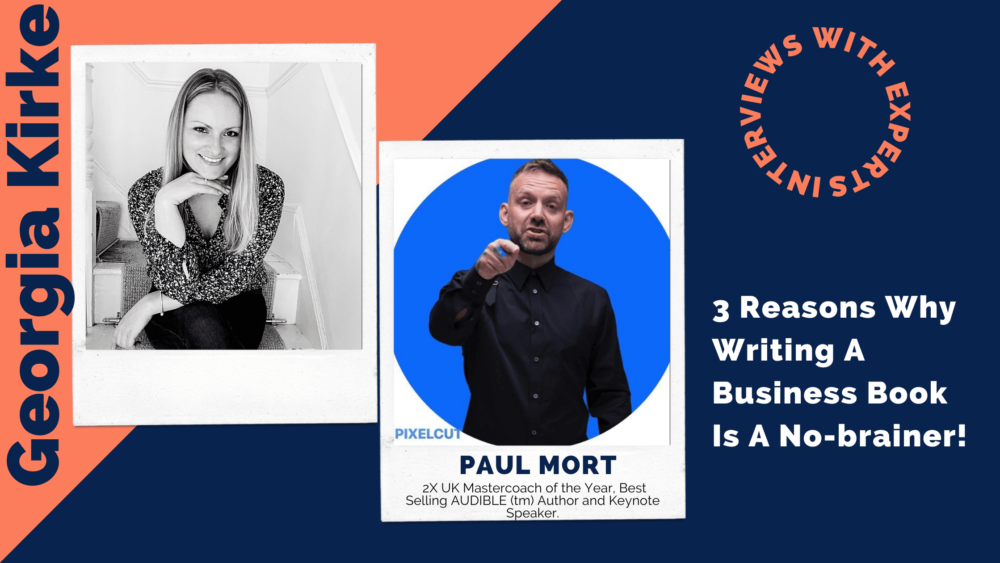 By Georgia Kirke with Paul Mort

Do you dream of writing a book to promote your personal brand then put it to the back of your mind? Do you think you have to be an amazing writer for your book to be successful? Do you see a book as something that other people produce, but not you?

Would it amaze you to know that one of the UK’s top coaches hated every minute of the time he spent writing his book but is thrilled at the opportunities and results it brings his business?

Paul Mort has been named Mastercoach of the Year (twice). He’s a motivational speaker and ranks amongst some of the best known names in personal development.

At his lowest point Paul found himself standing on a cliff edge ready to commit suicide when his wife, who had followed him, asked if he was willing to let his children grow up being labelled as “the kids whose dad killed himself”. The question forced Paul into taking charge of his life and propelled him even deeper into his mission to support men to reclaim their inner fire, drive and purpose.

In this blog we’re going to dive into the three reasons why Paul thinks writing a book is an outstanding way to build your personal brand. The first thing I wanted to know is why he cared so much about helping men turn their lives around.

Recognising why you do what you do

Paul: “I love helping people but what fills my heart even more than the personal transformation of the men that I work with is how it impacts on their families. To know that the kids of these men are seeing them take charge of their own wellbeing is immense. I’ve had people hit me up on social media and tell me that their brothers or sons were suicidal and now they’ve turned their lives around. I feel like I’m helping change the world one man at a time!”

Paul’s book, F*Cking Unstoppable: The Modern Man’s Guide To Grabbing Life By The Balls is a rallying call for men to take responsibility and fully take charge of their lives.

According to Paul, it’s long overdue.

Paul: “Until men stop blaming other people or the town or their industry or their family for how their lives are, there can be no change. You are powerless when you blame other people. If you want to take back the power you have to recognise that changing your life is not about blaming other people or finding fault, it’s about taking extreme responsibility, taking charge and doing something about it now.”

Paul emails his community on a daily basis, which is a little surprising considering how much he hated the process of writing his book!

Paul: “I hated every second of writing my book. Posting on social media or to your crowd is different because you’re interacting, but I felt like I was imprisoned in a basement when it was just me and my laptop.”

Even though Paul hated the experience of writing, he dug deep and found the motivation to write for three inspiring reasons.

Three reasons why writing a business book is a no-brainer

Paul: “A book gives people access to the information that they need in a way that’s easily accessible. If I have followers on social media they might not yet be in a position to buy a full-on coaching programme from me, but a book is an easy way for them to start the process.”

There are other coaches out there who do similar work to me, they might speak as fast or as loudly as I do but if they don’t have a book then I’m the one with the authority. It’s the best business card you’ll ever have and every time I sell a book I’m building a list of people who are interested in investing in the work that I do.”

Paul: “Business owners often share content for the sake of sharing content and being seen as having something to say, but you need to support your target audience to identify and take the next logical step. If you want people to join one of your programmes they need to be led to that point. If you want the good stuff to come to your business you need to put some skin in the game that gets you traction. Write a book!”

In addition to F*Cking Unstoppable: The Modern Man’s Guide To Grabbing Life By The Balls, Paul now has an audiobook Paul Mort Will Save Your Life.

If you’d like to take Paul’s advice and give your target audience what they need, become an authority, and lead people directly to the solutions to their problems (provided by your business), get in touch. At Write Business Results we excel at supporting you to build your personal brand and business through the delivery of high-value content that converts raving fans into paying customers.

P.S. – You don’t even have to love writing or do it yourself; we work closely with aspiring authors and, through detailed content consultations, can write the book for you!